The Animals of Harry Potter 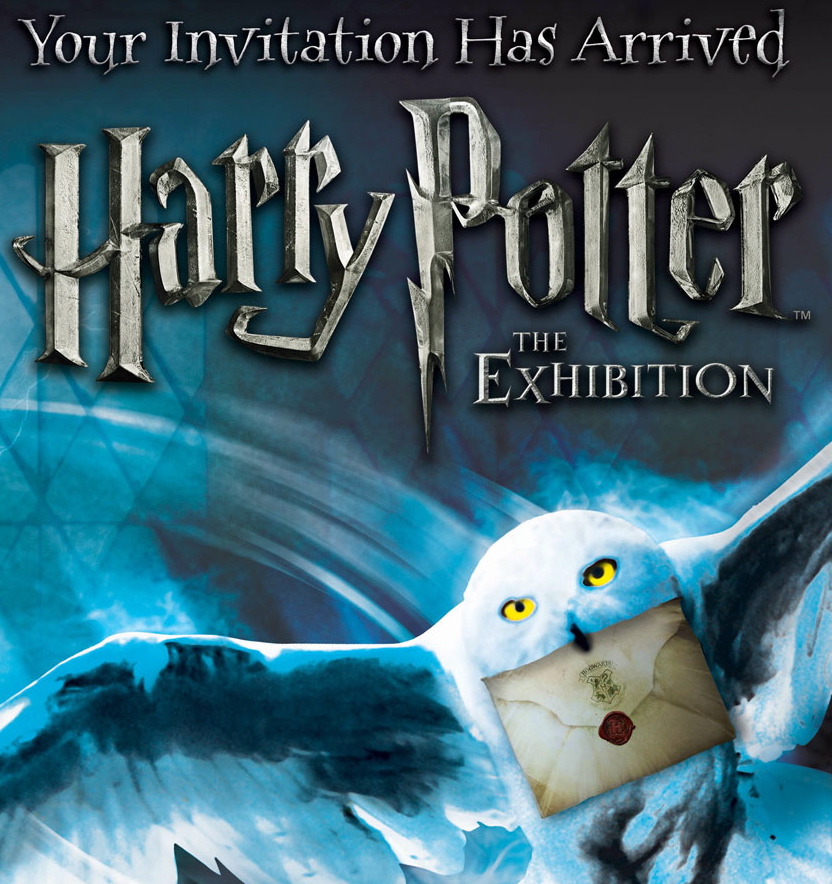 I LOVE the Harry Potter books  and movies (complete obsessive fan, and yes I know I am a grown woman, but everyone needs a bit of magic) so I was very lucky to be able to go the Harry Potter Exhibition at the Discovery Center in Times Square.  The exhibition was pricey (for two adults it cost 65$!), but I still really enjoyed it.  I got to see Ron Weasleys dress robes and sweater and his spello tape fixed  wand and Hagrid's hut.  (If you are a fan of the books or movies you will know what these things are).

Lately, I have been reading the books again for about the fifth time (I got the  complete set for Christmas, as well as the Harry Potter Book of Film Wizardry ).  I think the hounds enjoy story time (my husband took these pictures) and Baby the cat seems interested in my various Harry Potter knick knacks. 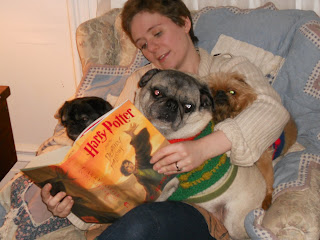 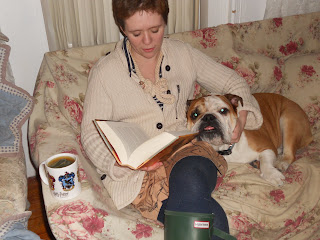 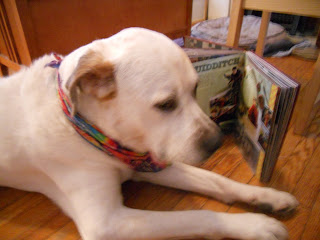 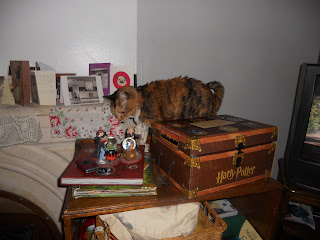 Since I can connect anything to animals and pets, I have decided to make a list, in honor of the exhibition, of 13 important animals and pets in the Harry Potter books.  (There are many more animals in the book). 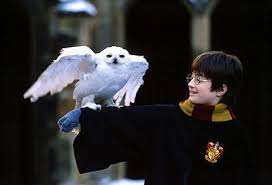 Harry Potter's snowy owl.   Harry gets the owl as a gift from Hagrid in book one.  He seems to be a fairly low maintenance pet, as are most of the owls.  Sadly, Hedwig is killed by the death eaters in book/movie 7. 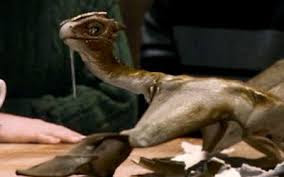 The namesake for my own precious Norbert. 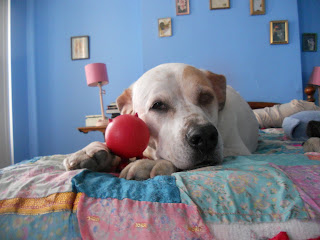 I had just bought the first movie the weekend we adopted Norbert.  Originally, I was going to name him Hagrid but then I thought the name of Hagrid's pet dragon would be cuter.   In the book Norbert is a pretty destructive pet, almost destroying Hagrid's hut, and our Norbert may have taken a cue from his name sake because he ate our couch and chair a few months after coming to live with us.   ﻿In the books a dragon doesn't make a very good pet (not like my perfect Norbert) and Hagrid is forced to send him to live in Romania at a dragon preserve looked after by Ron Weasley brother, Charlie.   Norbert and I got a shock when we read book seven and found out that Norbert is actually a girl, and has been rechristened Norberta! 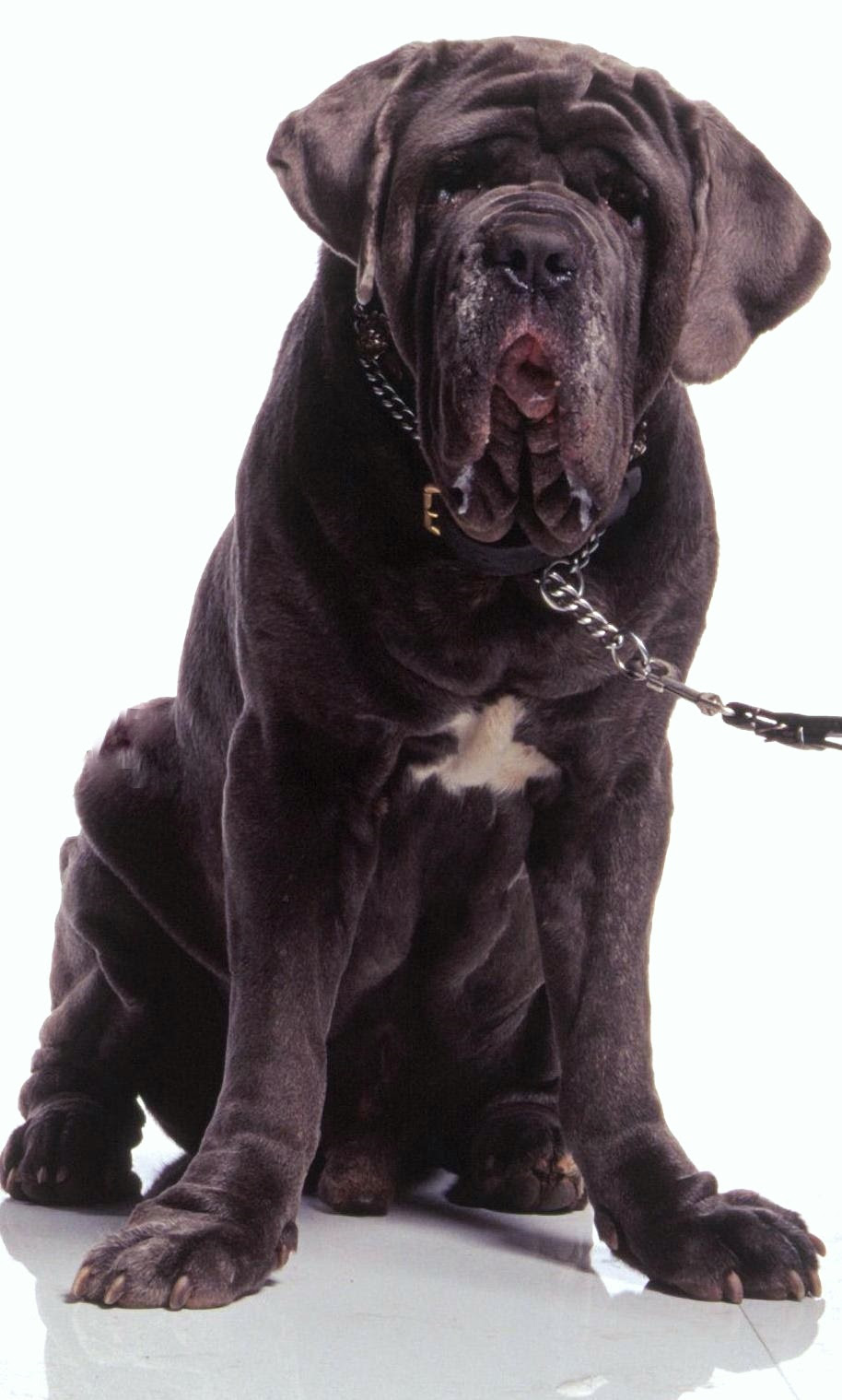 In the book Fang doesn't appear to be magic, he is just a sweet, drooly hound.   In the movies Fang is portrayed by a Neapolitan Mastiff.  So far Fang has been played by three dogs named Hugo, Monkey and Uno.

A three headed dog belonging to Hagrid that guards the Sorcer's (Philosopher's) Stone in book and movie 1.  Fluffy falls asleep if you play him some music. 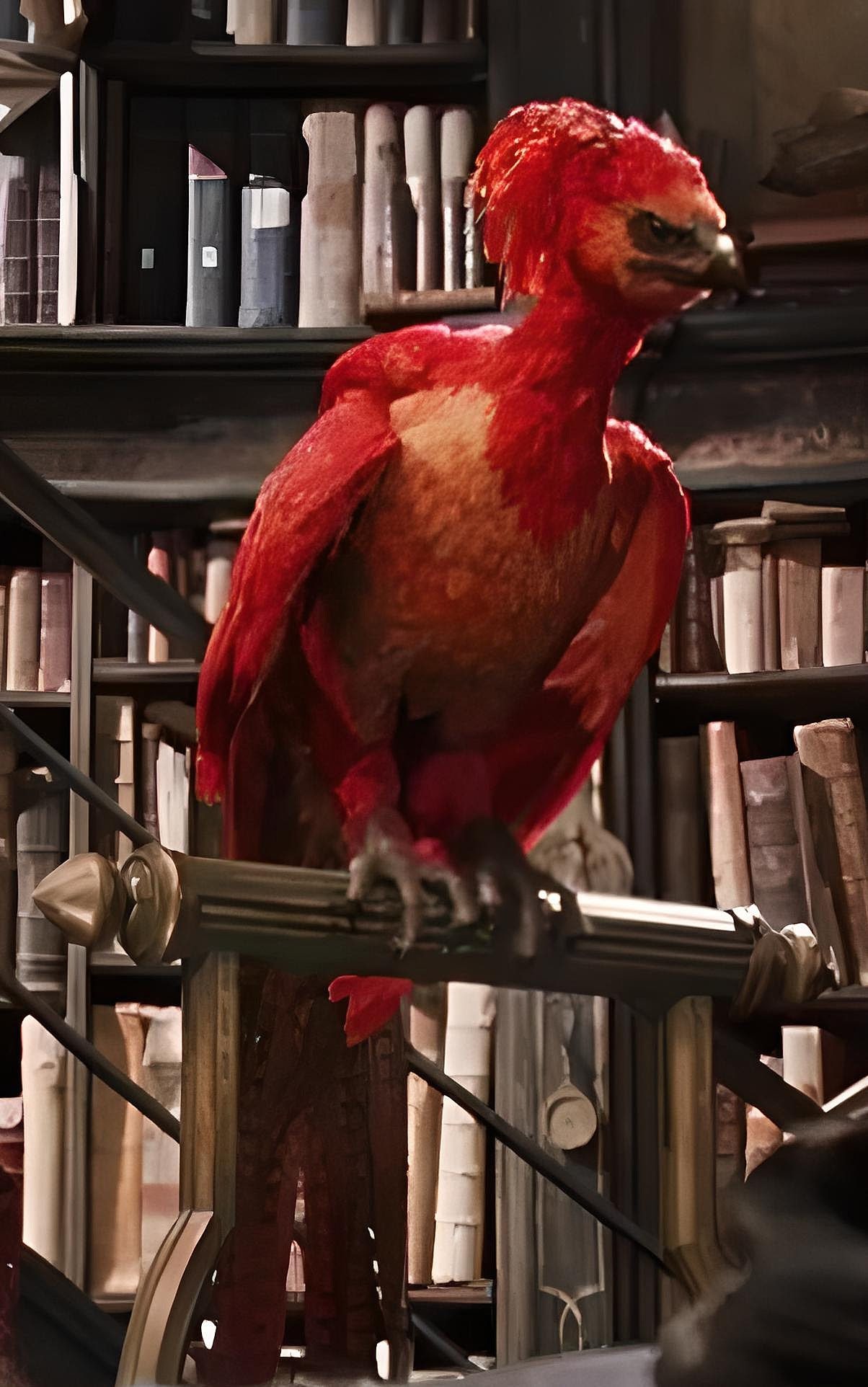 Fawkes is the Phoenix who lives in Dumbledore's office.  His tail feathers make up the core of the wands of Harry and Lord Voldermort.   Fawkes's tears have magical powers and heal Harry after he is bitten by the Basilisk in the second book.

6) Scabbers-   Scabbers is Ron's pet rat that he gets as hand me down from his brother Percy.  Scabbers is actually Peter Pettrigew a death eater who betrayed Harry's Parents to Lord Voldermort. 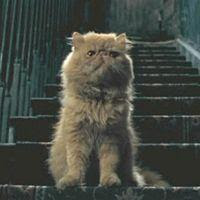 Hermione's magical cat, who is half Kneazle.  Crookshanks is very clever and discovers that Ron's rat Scabbers is actually the Animagus, Peter Petigrew.   He also helps Harry's godfather Sirius in book three.   In the films Crookshanks is played by a male Persian cat named Crackerjack. 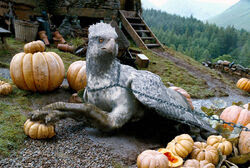 Is a Hippogriff who belongs to Hagrid.  In the third book Buckbeak is baited into biting Harry's nemesis Draco and is sentenced to death (a victim of breed specific legislation!).   Dumbledore and Harry, Ron, and Hermione help him to escape along with Harry's godfather, Sirius.  After Sirius is killed Buckbeak returns to the school to live with Hagrid under the new name of Witherwings. 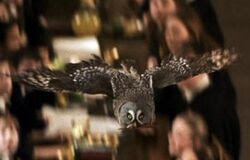 Is a grey owl who belongs to the Weasley family.   He is very old and sometimes crashes and makes mistakes during deliveries. 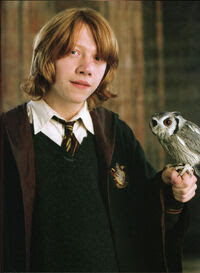 Is Ron's owl given to him in book three by Sirius Black.   He is a tiny little owl that enjoys playing tricks and is very eager and hyperactive.

are winged horses that live on the Hogwarts' grounds and pull the carriages.  They are invisible unless you have seen death.  In the books and movies the Thestrals are very loyal and help out the characters in several situations, by allowing them to ride on them.

12) Ron Weasley's Patronus    Ron is my favorite character so I was very happy when in the fifth book it was revealed that his Patronus takes the form of a dog, a Jack Russel terrier.

Is Lord Voldermort's snake and a Horcrux which means she contains a peace of his soul and has to be destroyed in order to allow Harry to deaft Voldermort.  In the seventh book she is killed by Neville Longbottom.