“Unable to love each other, the English turn to dogs.”
J.R. Ackerly

With love in the air for the month of February I finally got around to reading My Dog Tulip  by J.R. Ackerly .   The book is controversial among dog lovers,  due to to Ackerly's rather old fashioned style of dog rearing and his tendency to describe his dogs bathroom and sexual habits in detail.  For every person who loves the book and declares it one of the best literary works about animals of the twentieth century there are a dozen people describing Ackerly as a dreadful owner with rather bizarre interests in his dog. I really liked the 2009 animated feature, so I inspected to enjoy the book, and I did.

To appreciate Ackerly's work I think you have to remember that the book was published in 1956 and deals with events in England in the 1940s and 50s. Considering the time the book was written Ackerly's attitude toward picking up after his dog (he didn't) and breeding his dog (he worked desperately hard to do so because he believed she needed the experience of motherhood to be happy) is more understandable.   At one point Ackerly considers drowning Tulip's puppies, the fruit of months of efforts to find her a mate that she would except, of course this a horrible thought and I was relieved when Ackerly decided against the monstrous deed.  It definitely speaks to his depressive and misanthropic nature, which he does not attempt to hide in this book.  Ackerly was a bitter man who loved his dog and little else.  He also feared that Tulip's puppies would never find loving homes like the one Tulip and he shared.  In the end Ackerly finds the puppies homes, although for the most part they are entirely unsuitable and meet sad ends.

What I like about My Dog Tulip is that it is a love story about a man and his dog who care for each other deeply, and who are both deeply flawed individuals.  Ackerly is a curmudgeonly old British eccentric and Tulip (in real life she was named Queenie) is an utterly ordinary dog with significant flaws in behavior, that do not endure her to many other people then Ackerly.   One of the many gripes against the book is that Ackerly describes Tulip's bathroom habits in detail, which I agree can be a bit over the top, but I do think this is his attempt to make Tulip even more prosaic.   He wants to make sure the reader understands that Tulip is utterly unexceptional, to everyone but himself (and of course Ackerly was more then a little eccentric).

A very large portion of the book focuses in great detail on Tulip's sexuality and Ackerly's desperate attempts to find her a mate that she will approve of, with Tulip rejecting suitors by the dozen for no apparent reason.  Ackerly was convinced that Tulip could not live a full life without the experience of sex and motherhood.   This aspect of their relationship says more about Ackerly then it does about Tulip of course.  He was an openly gay man at a time when homosexuality was still considered a serious mental illness.  He wrote that he searched his entire life for a romantic relationship with an "ideal friend."  Of course in the end that ideal friend turned out to be Tulip.

I did find the book fairly uneven, when Ackerly is describing Brittish eccentrics like himself, or the wonderful lady vet who cares for Tulip, or the Colonel who owns an Alsatian male Tulip is mated too his writing sings.  His descriptions of Tulip walking and playing are charming and his devotion to her and hers to him is touching.  However, his constant writings about her sexuality and trying to mate her get rather tiresome and are a bit to Freudian for my taste.  I found myself skimming sections of the very short book.

Throughout, the book the threat of inevitable loss that all dog owners must face lingers.  Towards the end of the book Ackerly describes walking with Tulip in the woods and finding a broken bottle she could have stepped on, of course this bottle represents the inevitable threat at the heart of every loving relationship: loss.
"One pounce upon this bottle, with both front feet perhaps… I pick it up. I pick it all up, every tiny fragment. I seek it out, I root it up, this lurking threat to our security, our happiness, in the heart of the wood; day after day I uncover it and root it up, this disease in the heart of life."

Queenie, the real life inspiration for Tulip,  lived to be 16 and a half, a truly noble age for an Alsatian.  After her death Ackerly said:

"I would have immolated myself as a suttee when Queenie died. For no human would I ever have done such a thing, but by my love for Queenie I would have been irresistibly compelled."

Ackerly outlived Tulip by 6 years but he never got over her loss and his increased drinking after her death may have shortened his life.  Whatever flaws Ackerly had as a man and an owner he enjoyed a truly special bond with his dog. 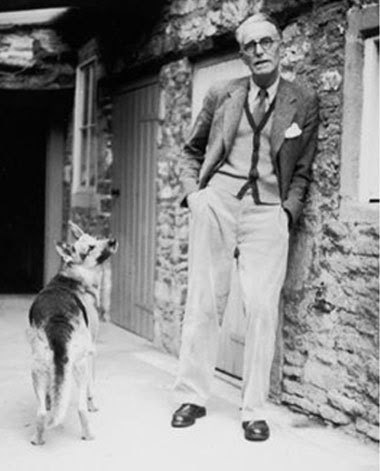